Why Internet Growth Is a Prime Cryptocurrency-Adoption Driver

Why Internet Growth Is a Prime Cryptocurrency-Adoption Driver As we enter the start of a new decade, the number of internet users has reached a truly astonishing level: Almost 4.5 billion people were active users as of January, encompassing 59% of the global population. With its growing influence on individual consumers and large economies alike, the internet has become a crucial part of our day-to-day lives. Moreover, acceptance of the World Wide Web is growing faster than ever with the rise of mobile technology. Many studies reveal to us an exciting revelation: The development of the web is driving acceptance of cryptocurrency.

Digital-currency acceptance is projected to grow 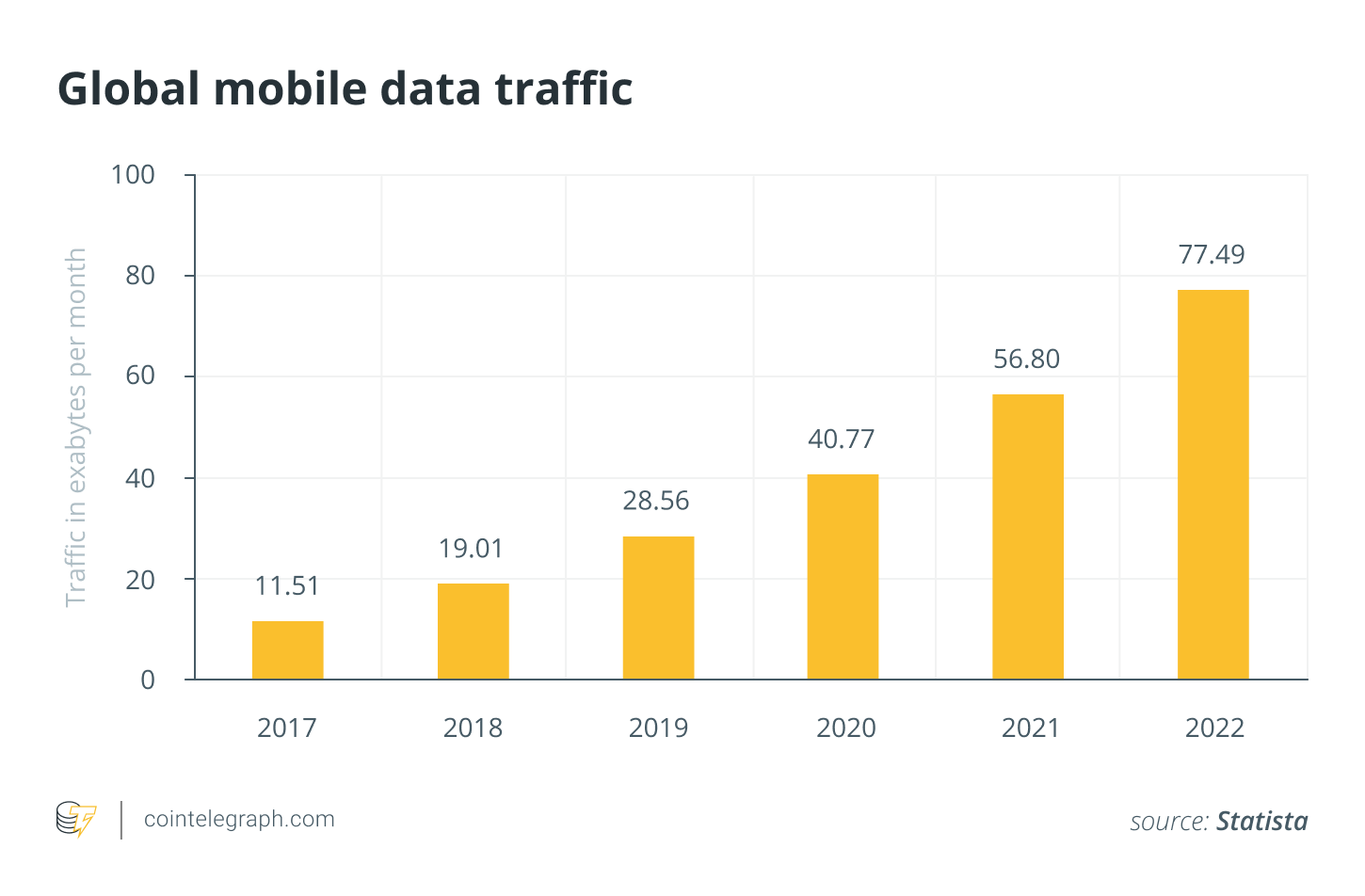 However, truly revolutionary opportunities are quite often missed. For example, the pioneering video-content company RealNetworks was the first to create a video-streaming service, doing so before YouTube was introduced in 2005. But it emerged before the market was ready. as the hardware power of 20 years ago did not allow for mass adoption. Back then, global media found this sort of innovation laughable, while nowadays we see clearly that many YouTube channels greatly outpace television networks in terms of audience numbers. Streaming wasn’t adopted much because the internet was not ready for such innovations back then, but the customers were. This is precisely where the crypto industry is today: There is high demand and the market is trying to keep up.

The very same is happening right now with the advent of blockchain and cryptocurrency. This field is greatly underappreciated. According to data from Statista, the number of blockchain wallets has been growing since Bitcoin (BTC) was created in 2009, reaching over 42 million users by the end of September 2019. This represents major progress, especially considering that it took place within a three-year timeline. In the third quarter of 2016, this number was fewer than 9 million. 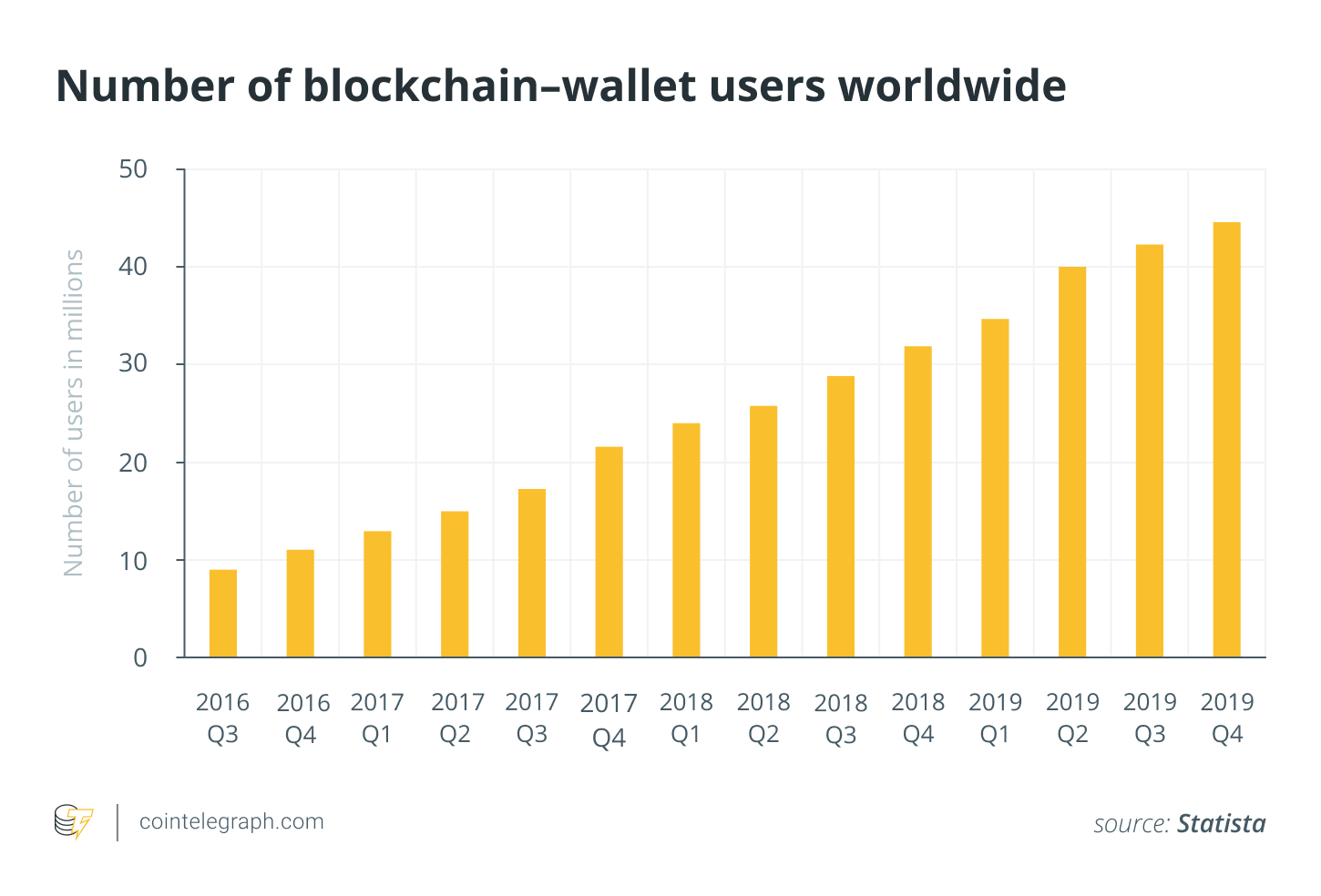 Other recent data suggests that global blockchain-technology revenues will experience significant growth in the coming years, with the market expected to climb to over $23.3 billion by 2023. The financial sector has been one of the quickest to invest in blockchain, with over 60% of the technology’s market value concentrated in this field.

The exciting similarity between blockchain and the internet

According to recent research from Deutsche Bank, acceptance of the internet and of blockchain go almost hand in hand.

The report from Deutsche Bank includes a graph that shows the starting points, middle points and projected forthcoming adoptions of both technologies. It clearly shows that both had a rough start during their initial years. However, after less than a decade in existence, internet adoption stood at around 500 million users. During the same timeframe, blockchain was used by approximately 50 million people. This ratio of 10 to 1 is clearly visible throughout the whole chart.

Judging from the Deutsche Bank data, both indicators are set to quadruple in 10 years, with blockchain reaching 2,000 users and the internet reaching 200 million users. 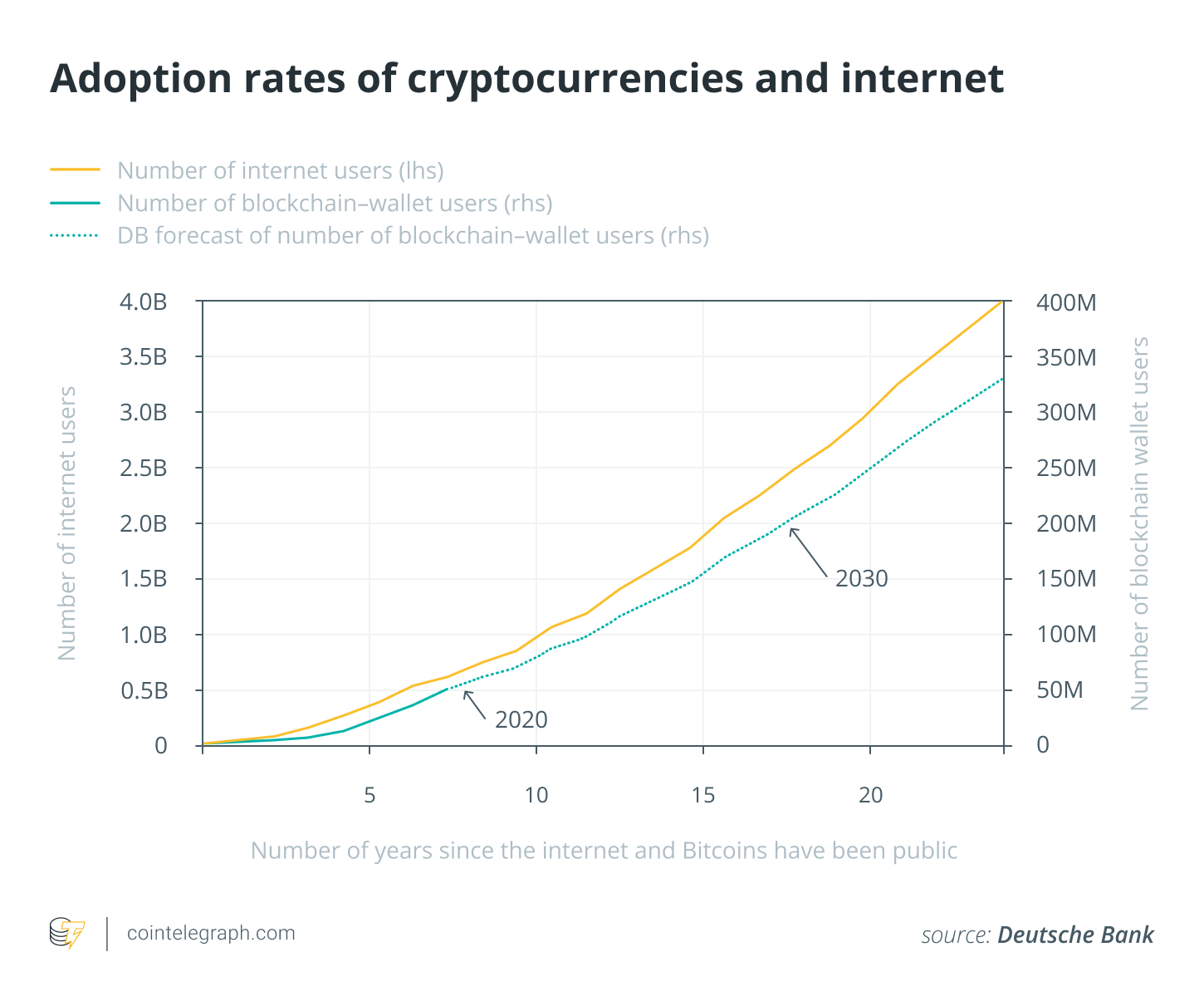 Overcoming stumbling blocks on the path toward crypto adoption

Estimates may vary, but we can say that as internet technology further progresses during the next decade, the distributed-ledger-technology industry will follow along. Perhaps not in leaps and bounds, but with steady, robust step-by-step increases.

There are particular challenges on the path toward global adoption: legal, technical and regulatory. However, I see 2020 as the year when blockchain technology will finally encounter real trouble in the world of finance and technology, allowing for new commercialization cases to be built upon this basis. There are so many opportunities that can significantly boost crypto adoption to millions — if not billions — of people. The blockchain disruption of acquiring, remittance and corporate settlement will be the very driver that will provide a new, large-scale wave of crypto adoption.

The views, thoughts and opinions expressed here are the author’s alone and do not necessarily reflect or represent the views and opinions of Cointelegraph.

Gregory Klumov is a stablecoin expert whose insights and opinions appear regularly in numerous international publications. He is the founder and CEO of Statis, a technology provider that issues the most widely used euro-backed stablecoins with a high transparency standard in the digital-asset industry.